Team Building: Learning More From Failure Than From Success

Team building is a very important part of any business… or any team for that matter. Without teamwork… a team doesn't work… literally.

Without teamwork your team won't function as well as it could. Without team building, your team's work won't improve or worse  - it could get worse!

Team building is more than gathering a few people together for a couple of beers. It's more technical than allowing yourself to fall backwards into the arms of your office buddies and hoping they catch you!

Team building can work really well, and it can hugely benefit your business, your team and office relationships.

What happens if your team don't think that it's for them?

What if your workers or colleagues think that team building will be too hard?

What if they worry that they'll fail at it? Won't that be bad?

We know this is a stumbling block but we also know that without failure you'll never succeed.

"Failure isn't fatal, but failure to change is" – John Wooden.

We look at failure as the areas that you, as a business, can learn from during and after your team building day.

We look at why the task failed, but more importantly how we can improve it next time. 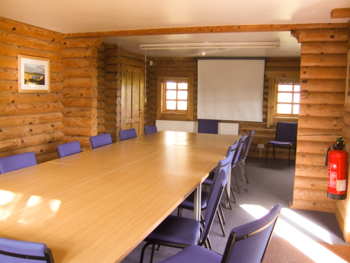 This is hard to do on a day-to-day basis in your business but out here, in the fields, and in our log cabin training room, it's easy to spot issues and deal with them in a classroom-style approach that get better results than disciplinarians.

A 'traditional' team building day at Adventure Sports involves teams of 6-8 people circulating around a series of 'problem solving' activities. Our events allow your team members to practice 'being the leader' or to try a different approach to problem solving.

It's all too easy for the natural leader to be the leader. But "he who shouts the loudest isn't always the most knowledgeable" (or the best person to lead).

We let others be the leader (or suggest that they take on the role, should we say). On the traditional team building day we'll rotate the games, teams, but more importantly the roles, to really test your team.

Failure – it's a good thing in team building, you know!

If it all goes wrong it's not the end of the world. During our team building sessions no one really loses. If you fail at making it across the course you don't really fall into acid and suffer from third degree burns (it's all a game).

Sometimes we find a natural born leader you didn't know you had.

On occasion we strike gold and find a member of your team with hidden talents.

We have had groups who are terrified of trying something different at work for fear of getting it wrong.

Giving up is the only sure way to failure…

Let's face it. When you don't try something you'll fail. If you never really start how do you expect to finish? Team building days are very much about that ethos.

Even if it doesn't end up as successful as they'd hoped we can really work on why it didn't; that's a really powerful part of any team building exercise.

You won't take the physical skills back to work. You don't need a succession of ropes and six team mates to get to the watercooler or photocopier but the communication skills you learn will help your next team meeting.

You won't need to navigate a barrel across a chasm to nail that next pitch but the stronger teamwork will pay dividends on the work leading up to it.

What do we mean when we say Traditional Team Building? 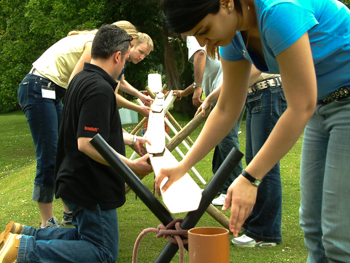 Adventure Sports has designed and delivered team building events for well over 20 years (our original military style 'command tasks' were first used by us in 1990!) The principle of a day is to ensure each team is faced with a series of problems, usually practical outdoor challenges, that can be overcome if the team work together. The actual challenge is not terribly important, it's how the team goes about solving the problem that is fascinating.

Six to eight people is the optimum team size so, for larger groups, we will divide the group down into multiple teams (any group size from 6 to 250 can be accommodated). The teams then head out around our 100 acre Warwickshire activity centre to discover their challenges under the guidance of one our instructors. The instructors role is to look after the team, make sure they don't get too lost (teams often use map and compass to find their way to their activities) and to observe and provide feedback after each activity.

So, What are Team Building Challenges?

The challenges are there to allow teams to try out leadership techniques, experiment with problem solving techniques and bond with fellow team workers. We use well over 2

0 different exercises of differing levels of physical requirement and complexity. Part of setting up the event will be establishing who you have in your group to make sure the tasks are achievable and yet challenging. Examples include: 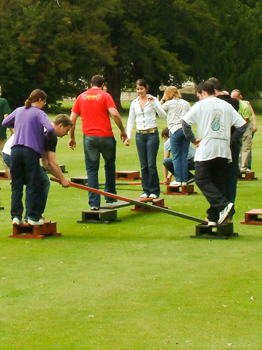 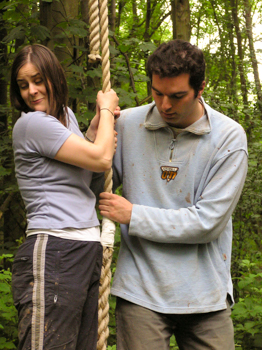 Some say that team building isn't for everyone - we disagree.

We think it's essential for everyone to test themselves, their skills and their boundaries.

It's also essential for your team to communicate well with each other or even the most skilful teams won't give you the best results.

Team building is tailored to your needs and requirements but it's also backed up with teachings, improvements and thought-provoking moments that really do make that difference you're looking for.

We'll leave you with this thought…

If you need to improve your team skill contact Adventure Sports to talk through some details - take the first step to changing your team for the better.

How to Organise a Corporate Event

Have you Been Asked to Organise a Corporate Event? We receive many phone calls each week from people who have been tasked arranging a 'company day out' but are really not sure about what to do.

If you are a bit late organising the office Christmas Party, our Christmas event will be perfect for you. So, why is it better than a pint down the pub?