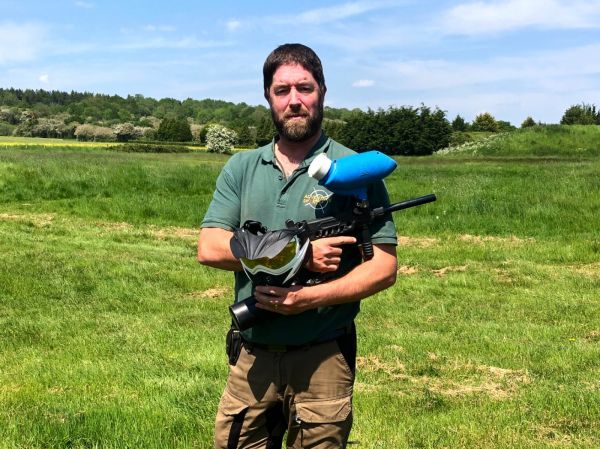 James was a Paintball Marshall in his youth when he lived in Surrey. His family moved to the Midlands when he was a teenager he applied for a Paintball position with us to continue his passion. Paintball is in James' blood, as he used to play in many tournaments. He Started his journey with us as a paintball Marshall in 1992, He then moved up to activity instructor shortly after, and has been our Site manager for the last 14 years. James is very busy on site and keeps he's step tracker very active!

He walks miles and miles and gets through boots very quickly. He meets and greets all our guests when they arrive, he can instruct on everything apart from Clay shooting, (but he's an expert Clay trapper and scorer). He knows the woods like the back of his hands, and he schedules all our staff for work which is a challenging job as things are changing all the time here. He overseas our corporate groups and has done many mobile team building jobs, packing and unpacking our trusty white van!. James is the first to say however he would rather be outside with the customers than office based, with an overflowing in tray! He says his job gives him great satisfaction when he's teaching Archery for example, to see the improvements in people in the short time he has with them is really satisfying. His favourite activities are 4x4 driving, he says it's fun to show people what the cars are really built to do!! However give him a Paintball gun and his mask and he's off re-living his youth!!! He says he still gets "the buzz" even if he is a bit older now and cant quite run as fast!

He says he likes his job here as he is outside a lot, he likes meeting new customers and everyday is different. Ih his spare time you will find him by the Lake fishing, supporting the Wasps with his daughter, or walking his dog.